Arriving back at Masset after 1979 Christmas holidays off-island, I still had a little time to fill before school started up again, so I decided to head out Tow Hill Road to Sangan. The spit of land east of the river where it emptied itself into the ocean had for untold years been a favorite fishing and picnicking site for islanders, which they called Limberlost, and I had seen pictures of myself and my family taken there many years earlier when I was just a small tyke. So I decided to head out that way for old time sake, and maybe get some pictures to share with my parents. 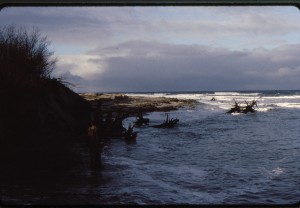 The weather had cleared and the sky was pale blue with a few banks of fluffy white clouds. Most of the snow had long since been washed away, and the shorelines were bare except for growing piles of driftwood tossed up by winter’s storms and high tides. Only in a few spots along the mouth of the creek, in the shadows where ice had piled up, were small patches of snow left from the mighty snow storm less than a month earlier. 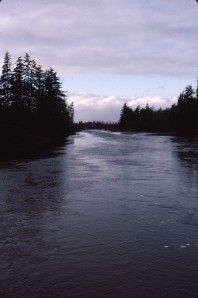 Tangled tree branches and roots were caught up in the piles of huge logs tossed up on the shore, and even in the shallows in the center of the river’s mouth. I turned to gaze up the river where it stretched its way into the island’s interior. 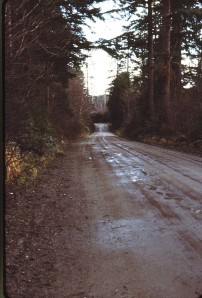 Then I got in my van and drove a little way farther down Tow Hill Road. The road in those days was narrow and rough. In many spots it was so narrow that the tree branches from the towering trees on each side actually met overhead, forming a dark green-lighted tunnel. In the old days, before gravel was laid on the road, it was muddy and wet, running through the muskeggy floor of the forest. So planks had been cut and laid end to end for miles. The trick was to keep one’s car wheels on the slippery planks, for sliding off could get one stuck in the mud. Unfortunately, there has been only one set of planks, and if one met an on-coming vehicle, someone would have to pull off to let the other by. But those old adventurous days were gone, and only in a few spots did the remnants of the old planks still show through.

On the west side of the road, the forest stretched into the distance, with tall evergreen trees hanging with mosses, and on the forest floor below was thick moss and the remains of old fallen giants of the forest. In low spots, water gathered, forming little ponds and areas of muskeg. In some places, the water rose so high in winter that the road would be flooded. On the east side, tree and moss-covered dunes rose up from next to the road, on the far side giving way to sandy beaches.The sun was shining through the branches of the forest canopy, providing a quiet, dappled, mossy-rich world. After a short drive, I turned back, but stopped frequently to snap pictures of this beautiful world that seemed lost in time. I thought of the countless generations of his people who had called these islands home for thousands of years.

Finally I arrived back at Limberlost, and took at few snapshots of the flats where my family had once spent happy picnic hours – and where Lionel’s family had also picnicked. 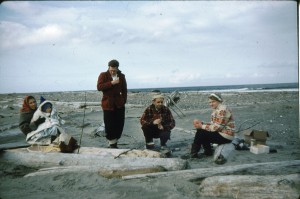 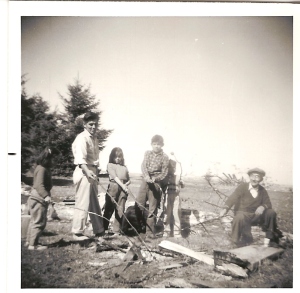 based on memories recorded in snapshots from January 1980 – and from the mid-1950s!

Your comments are always welcome. Guest posts are also invited--articles, stories, poetry related to Haida Gwaii. And if you have some good photos, we'd love to post them!
Loading Comments...
%d bloggers like this: